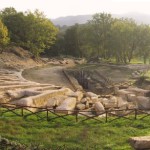 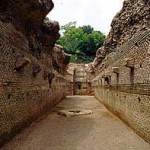 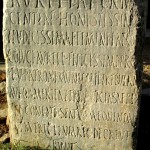 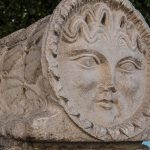 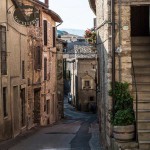 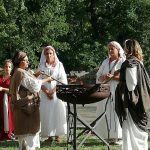 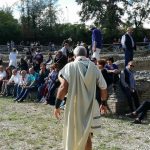 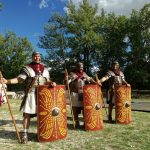 3 min, 200 m
The ancient village of  Trebula Mutuesca is not far from the current Monteleone Sabino and not so far from Turano valley , which was probably part of  its domain.
The existence of  previous dwellings is attested by the presence of some polygonal sorrounding walls built with roughly shaped limestone blocks on the hills neighbouring  the Roman settlement.
There are not many quotes of Trebula Mutuesca  in the classical sources that can give us information about the life and the society of the ancient  Sabine center.
Strabone , Dionysius of Alicarnasso and Plinius the elder briefly mention the town.  According  to a not so clear quote of the Liber Coloniarum, the territory of  Trebula Mutuesca would have been assigned, during the Augustan ages, as Ager of Cures Sabini.
Interesting information about the type of crops cultivated in Trebula is contained in a passage of the Eneide (VII, 711),  in which Virgilio remembers the valiant soldiers of  Mutuesca , land rich in olive groves (Ereti manus omnis oliviferaeque Mutuscae). An agrarian landscape dominated by olive groves,  considered by the Latin poet as the symbol of  the trebulanus ager.
Another episode of some relevance is reported by Granio Liciniano and Giulio Ossequente, who have  gleaned the news from Tito Livio, handing it down, even though not in a perfectly coinciding way.
In 106  BC while the games were starting and a flautist was beginning to play his instrument, some black snakes turned out quickly and went away when the music stopped.  The next day the snakes appeared again, but the crowd killed them with stones.
When the Temple of Mars was opened , the wooden statue of  Mars was found upside down.
Probably this episode has to be linked to the worship of the goddess Angizia, epigraphically attested  in  Trebula and connected, in the Centroitalic area, to the snakes’ magic, which still has some reflections and echoes in Marsica.

But the deity  most  revered at Trebula was, without doubt, the goddess Feronia, a divinity with a widespread worship in the Centroitalic area, from Rimini to Terracina.  To keep in mind that,  immediately beyond the Tiber, there was the main sanctuary of the goddess Feronia , Locus Feroniae,  linked to agriculture and fertility. There are many dedications to Feronia  found in the area of ancient Trebula. Particularly important was that of Q. Pescennius, who had donated for the construction and embellishment and of the temple, three columns and the crepidine stone.

It is probable that the temple dedicated to Feronia was near to the church of St. Vittoria, where a votive deposit was discovered and excavated two times in recent decades. From this excavation numerous finds were recovered,  including a large number of terracotta heads, anatomical parts, zoomorphic statuettes and a large amount of  black painted ceramics, materials similar to those of  Roman area.
These finds can all be dated with a good approximation in the first half of the 3rd century  BC, not long afterwards the final conquest of Sabina in 290 BC, and they attest the flowering of the inhabited area afterwards the arrival of the Roman.
The development of Trebula Mutuesca was however slow,  infact  when Lucio Mummio, consul in 146  BC and conqueror of Corinth, sent sculptures as donations to many Italian and Spanish towns,  in the two donations sent to Trebula this village was defined as a vicus, a village that had not yet reached the dignity of the city. The constitution in a municipal town was reached by Trebula quite late, probably after the social war of the early first century  BC or perhaps in the Augustan age, as reported in a passage of the Liber Coloniarum.
The political-institutional structures of Trebula  followed archaic models, so the magistrates of the Sabine town were the octovires, in place of the most common quattorviri.
The urban structures of Trebula Mutuesca developed on three hills, about a mile and a half from the current Monteleone:  the Foro hill, the Castellano hill and the Diana hill, and along the valley enclosed between the three heights, called Pantano.
In the area, the remains of imposing structures pertaining to the small town are visible. Some excavations, carried out in the 1950s,  have  revealed part of the amphitheater and the thermal baths.
An intense building activity developed around the 2nd century BC to give a monumental connotation to the settlement.
This building activity has been linked not so much to the flowering of the local economy , but rather to the desire of a powerful family of the area, the Brutti Praesentes who owned wide lands.  An important exponent of  this family, Laberia Crispina, contributed greatly to the transformation of the town’s urban structures, to show  their social ascent and their liberality.
A large number of information on the public life of the Sabine town can be obtained from a conspicous corpus of  inscriptions,  re-used in the  Santa Vittoria church’s construction.
The ruins of  Trebula were also the scene of the defeat  of  a Saracen armband who had settled there.
Sabini and Reatini, reorganized under the command of  Takeprandus, attacked the Saracens , probably in the early months of 915,  since in the tale of  a monk, Benedetto of  S. Andrea in flumine, this battle seems to have preceded the decisive battle on the Garigliano, where the Saracens have  sought refuge,  immediately after the defeat  suffered in Trebula.