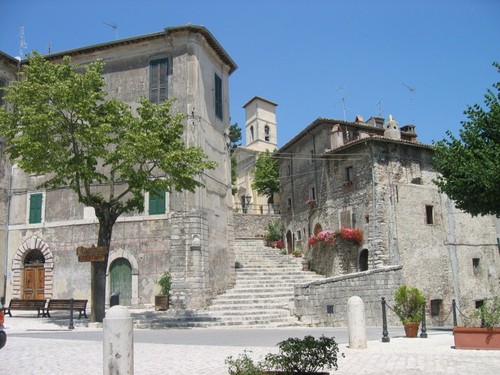 25 km, 35 minutes
The medieval village of Orvinio is the highest in the Parco dei Monti Lucretili, in a panoramic area at equal distance from the Via Salaria and Via Tiburtina.
You breathe the mountain air at over 800 meters above sea level, in this town which is rich of memory, for having given birth or hosted personalities of art and, especially, for its beautiful churches and castle.
Founded by the Sicilians, the ancient city of Orvinium was completely destroyed before 1000 a.D.
Later it took the funny name “Canemortem”, from which Canemorto (dead dog), held until 1863.
The medieval town, where you enter through a large arch, still retains its old charm. For many centuries Orvinio remained under the control of the Benedictine monks of Santa Maria del Piano; in the 16th century it became a feud of the Orsini family, and then of the ducal family of Muti. After 1625 it passed to the Borghese who became dukes.
In 19th century it was part of the Papal States and was the seat of government and residence of the Governor.

The surrounding landscape is perfect for motorcycle rides and cycling through its winding roads among forests and valleys overlooking olive groves.
In Orvinio they grow a particular, very tasty potato, but the best products are honey and hulled wheat.
The festivals are dedicated to “polenta” and “cecamariti” (an ancient dish of poor people, consisting of turnips, beans and stale bread). In the menu there are also the traditional “sagne all’aglione” or porcini mushrooms, and grilled specialities accompanied by the “pizza-pane” and wild chicory.