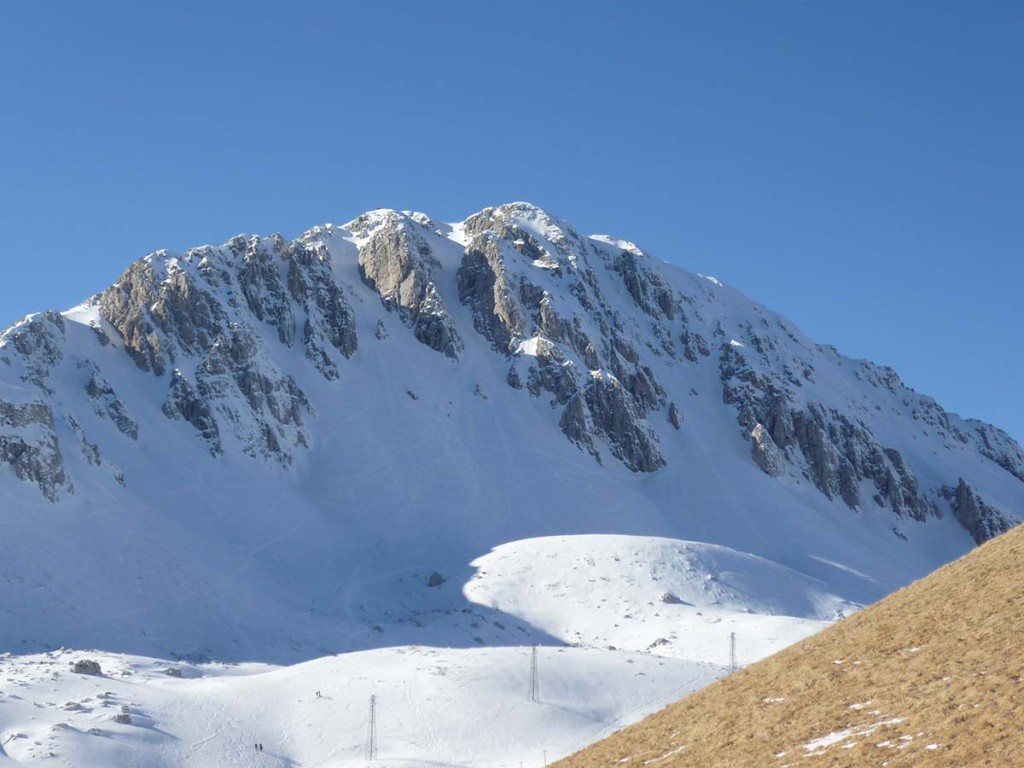 55 km, 1 hour 15 minutes
In all seasons, but especially in hot days during summer, it’s worth taking the car in the morning and go out to enjoy the fresh air and beautiful nature on Monte Terminillo, one of the most beautiful peaks of the Apennines.
We frequently go there to hike, walk or bike, but also in winter to ski, because the tracks are not bad, and really not crowded.

The Terminillo has several peaks over 2,000 meters; on each side it is marked by wide and deep valleys that sign its orographic boundaries and separate it from other small mountain ranges surrounding it.
Among these valleys Vallonina, leading to Leonessa, stands out for its naturalistic interest, so as Ravara and Caposcura valleys descending towards the Velino river and the ancient consular route Via Salaria.
On the opposite side are the valleys of the Inferno (the hell valley) and of the Angeli (the angels valley) that descend to the plain of Rieti and towards the mountains of Cantalice.
Up to height of mid-mountain (1600-1800 m) it is covered by forests on all sides.

The Terminillo was launched for tourists in the thirties after a visit from Benito Mussolini who was “impressed by the beauty of the mountain range” and ordered to build a wide road to the mountain, while at those times it could be reached only on foot or horseback through the trails.

The massif is home to two ski resorts, a most famous and popular one on the southern slope which takes its name directly from the mountain and leads to Campoforogna, the other on the opposite northern side (Leonessa-campo Stella). The historic cable car built in 1938 is still running, with the decorations made by the avant-garde painter Achille Dal Lago in the departure station.

More than skiing, the mountain sees constantly growing interest in sports such as hiking (sky race, running race along the paths of the Italian Alpine Club) and hiking in summer and winter.
Mountaineering and climbing are activities carried on Terminillo for over fourty years, as the bastions of the east and north walls offer opportunities for both summer and winter alpine ascents.
Worthy of interest, especially in winter time, the Cresta Sassetelli  at the west of the summit, the small group of mountains immediately next to Vallone Monti (Elephant Mountain, the highest peak 2,015 m) has mountaineering routes and ski touring in winter of great beauty and complexity: ice climbing, mixed and channels with significant exposure and many walking trails leading to the summit or on the secondary peaks, from both sides.
From the top, the view extends to 360° on the plain of Rieti, on the whole Sabina until the Roman countryside, the mountains of Lazio, the Monti Sibillini, the Monti della Laga, the Gran Sasso of Italy, the mountains of Cicolano, of the Duchessa, Velino and Carseolani.
There are also different possibilities of cycling both on the road with the rise to Leonessa by North and South, both in mountain biking on the many dirt roads that the massive offers.
In particular, very striking is the rise from the eastern side along the dirt road that leads up to the typical mountain canyons of the Sella Velino through the town of Micigliano.