The Sabina region, with its green hills, its territory plenty of water, shows a panorama scattered with olive trees, grandiose oaks, beech forests and vineyards.

A few kilometers from Rome, an unspoilt landscape preserves its medieval villages, its Sacred Valley, the many castles and Roman villas, which are tangible traces of an important past. Sabina was the land where the Sabines lived, a pre-Roman Indo-European population of Osco Umbrian stock. This ancient Italic people was in perpetual war with Rome, starting from the first legendary battle, which took place after the famous “Rape of the Sabine Women”: according to tradition, after he had founded Rome, Romulus addressed to the neighboring tribes (the Sabines indeed) to form alliances and obtain the women with whom to procreate and populate the new city; at the refusal of the neighbors, Romulus answered by trickery, organizing a great show to attract the region’s inhabitants, and in that occasion kidnapped their women. Historically, “Sabina” was the name used to denote a territory with quite variable borders of the Papal state, extending from Rieti and Turano valley to the Tiber.

With the birth of the State of the Church it was for a time directly governed by the Pope, then entrusted to noble families, who established several territorial divisions, including the County of Sabina and the Patrimonium Sabinese.
The papal province of Sabina officially dates back to 1605, with the Rector’s headquarters in Collevecchio, during the pontificate of Paul V (1605-1621), who resumed a direct control over that territory.

The Sabina region begins today from the municipality of Rome and extends from the left bank of the Tiber river to reach and pass the Sabine Mountains. Most part of the territory of Sabina is part of the province of Rieti, a part is in the province of Rome (Roman Sabina), another in Umbria and Abruzzo regions. 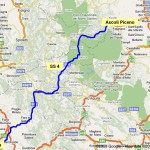 The Sabine territory is crossed by the ancient Via Salaria, so called because through it the Romans carried their salt from the ford of the Tiber to Sabina and far beyond, to the Adriatic sea.
Even today you can follow this long route, through many villages, Roman and medieval towns of great beauty and unspoilt landscapes of valleys, lakes, mountains and forests. You can easily follow your route on a modern map, following the names of the old towns that the way crossed in Roman times and still crosses now.

From the Aurelian walls of Rome the route came through in the direction of Porta Salaria, passing Villa Ada, headed toward the rampart of Forte Antenne (Antemnae) venturing into the territory of the Sabina region. Once it crossed the Aniene river through Ponte Salario and went beyond the nearby mediaeval tower, the route came to the hills of Fidene (Fidenae) and continued toward Settebagni (Septem balnea). Therefore it climbed the Marcigliana Vecchia hill, overtook Monterotondo (Eretum), then passed the Passo Corese stream and further up the road met Borgo Quinzio, Torricella and Poggio San Lorenzo.
Near Trebula Mutuesca (later Monteleone Sabino), the road divided: one branch (via Cecilia) turned to the east, climbed over the Apennines mountains to reach the plain of Amiternum and the Capannelle pass and went on to the land of Pretutii, to the sea near Giulianova.
After the village of San Giovanni Reatino, the road ran along the Turano river and crossed the wild Velino river, climbing to the Sabine city of Rieti (Reate). From here the route turned towards the east along the Velino river to reach the high Civitas ducalis, then Cittaducale and later the nearby Cotilia (Vicus Reatinus). After crossing the Velino at Ponte Margherita, the road entered the plain of Borgovelino and Antrodoco.
The main branch of the Via Salaria continued in a northerly direction along the canyons on the slopes of Mount Terminillo, which, to be passed, required advanced technical ideas and solutions for Augustus, Vespasian and Trajan’s engineers. Then the road climbed steadily until it reached the village of Posta, strategic and ancient Roman mansio, and the wide plateau of Bacugno and Cittareale, in the ancient Falacrina valley, to arrive at the crossing place of Torrita (1000 meters above sea level). At this point the road passed over the Tyrrhenian-Adriatic watershed and began to descend to the wide plateau of the Amatriciano basin.
The road then descended into the Tronto river’s valley to come to Ascoli Piceno (Asculum), and to the Adriatic Sea at the mouth of the river, on the right bank (Martinsicuro).